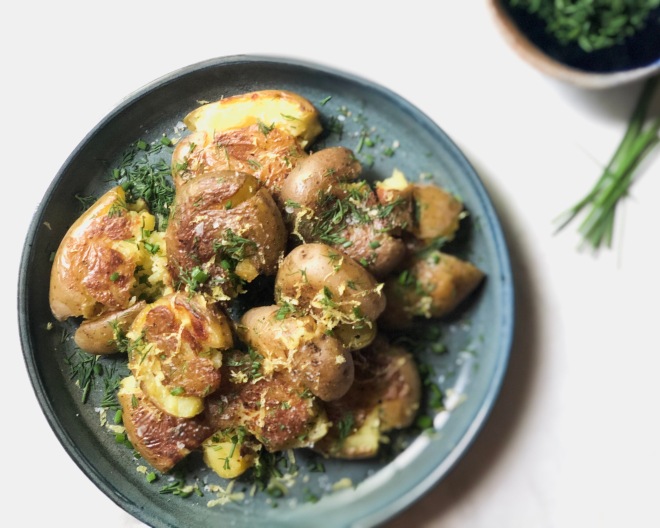 Can you tell it was a market day? These days are some of my favourite and I’m still trying to figure out what is the best summer food.
One might guess asparagus, berries, tomatoes or corn… but then there is the humble potato. Nothing screams summer dinner to me more than every including a cob of fresh corn, green beans and early treasures like baby potatoes.

There are about five thousand varieties of potatoes and ALL of them have to start out as babies.
These small, young, thin-skinned delights have just started to be robbed from the ground and sent to market on the same day. They are waiting to be boiled up and melt in your mouth.

In a large saucepan, boil the potatoes until fork tender.
Drain and score the bottom of each potato crosswise. Place knicked side down and smash each potato with your thumb or the back of a spoon to flatten.
Heat olive oil on medium high and sauté each side for about 3 – 5 minutes or until equally golden and crisp.
Remove potatoes to serving plate, reserving the remaining oil in the pan.
Sprinkle with salt, cracked pepper, herbs and lemon zest.

I have to admit, when I first flipped through it, I wasn’t totally taken by PeTA’s new Vegan College Cookbook. It was lacking photography, and well, real food. Then I realized, I made it through college already and I did it with market and a Beer Store practically across the street – certainly a benefit when not having to live in a dorm for sure.
Where this book may occasionally cook directly from a ramen packet to a microwave, I think the book more than makes up for it in it’s simplicity, it is encouraging cooking and sticking true to oneself and beliefs – especially as the ultimate visitor in a processed food, meat lovers world. There are clever suggestions and quick recipes to fill you up all while keeping a limited budget and tools in mind.
The recipes are young and quirky, easy and cheap and with 275 of them, that can keep someone eating for just about every day you’re at school.

The people at PeTA were so nice to share and are letting me give TWO copies away.
If you’d like your chance at getting one, just leave a comment below by Wednesday, May 13th and I’ll randomly choose two winners. Good Luck!

Even on vacation bananas go brown. Not like I didn’t think it wouldn’t happen, it’s warmer here plus we’ve been too busy playing to eat them right away. Needless to say, I couldn’t store them in the freezer for another time and I certainly didn’t want to throw them away. Thankfully I have a tried and true recipe for this super quick banana bread that’s the go-to with overripe bananas. With a few pantry items, I was back on the beach in no time.

…And yes, I even bake on vacation….

Preheat the oven to 350ºF.
Mash the bananas well and combine them with the butter and the sugars to cream.
Add the salt, baking powder and baking soda to combine.
Stir in each of the flours, mixing until just moistened.
Bake in a slightly greased and flour dusted loaf pan for 35-40 minutes of until a cake tester comes out clean.
Let rest for a few minutes before removing from the pan to cool on a wire rack.

For something a little fancier, drizzle over some cooled caramel and serve it for dessert!

We found ourselves getting a bit carried away, shall we say at the apple orchard last week.
At least, not until we’d discovered an overwhelming tree full of brightest red Mac’s. Our picking was literally done in minutes. With my filled bag, I headed to the scales and the woman running the show was notably impressed by our haul.
I’m greedy, I thought. We leave on vacation in four days, how are we possible going to go through an 18 pound bag of fresh apples?*

As I listed off potential recipes to make a dent, we were invited for a casual afternoon with friends so, this is what we made.
Thrown together, it was a cinch to make and although it only used up two apples, it was pretty delicious and perfect for tea.

Preheat the oven to 350ºF.
Combine the two flours with a fork and set aside.
Cream the butter, less the two tablespoons, with 1/2 cup of the brown sugar and 1/4 cup of the granulated sugar.
Pour in the teaspoon of vanilla extract and add the 1 teaspoon of the cinnamon.
Add the baking powder and soda then continue to mix until fluffy.
In a measuring cup, soy milk and lemon juice.
Add half soy milk mixture to the creamed sugar, then half of the flours, mixing until each is combined, repeating with the remainder.
Evenly spread the butter over the bottom of an 8″x8″ baking pan. Sprinkle over the remaining 1/4 cup of brown sugar and 1/4 teaspoon of cinnamon.
Lay out the apple slices over top of the sugar in an even layer.
Add the cake batter to the pan.
Bake in the center of the oven for about 35 – 45 minutes or until a cake tester can be cleanly removed.
Cool in the pan then gently slide a knife around the edges before turning it out to a cooling rack or a serving plate to completely cool.

Serve warm or at room temperature.

*Oh, and just as an update, after creating and edible centerpiece, a few pints of slow-cooker apple butter and a pot of pumpkin soup, I’m down to four (count ’em 4) apples! I had to restrain myself not to get any more… but I have about 50Lbs of pumpkins… and a whole other story.

These friendly, sweet vegetables just go together. Fresh with a splash of Asian inspired dressing, it’s crisp and sooths the summer heat

I’m guessing these would go great with these Scallion Pancakes and just about anything grilled. Give it a try.

In a small bowl, whisk together the sesame oil, vinegar, sugar, salt and pepper.
If using regular white sesame seeds, lightly toast them in a dry pan until they just become golden over a medium-high heat. If using the black sesame seeds, you may skip this step.
Wash and thinly slice the vegetables. Toss them together in your serving bowl with your fingers to mix.
Drizzle and toss the dressing over the peas and carrots.
Sprinkle over the sesame seeds to serve.

I am one of those people who like cilantro. Cilantro is a love it or hate it kind of thing. Thankfully the herby leaf it offers to 50% of the population who enjoy it, also comes with a seed. Coriander, which the seed more commonly goes by, lends a refreshing and slightly citrusy flavour. Blended with other spices, coriander is perfect and essential for milder curry combinations.

Common yellow curry is the key to this soup. Spices like coriander, along with tumeric, cumin, mustard seed, cloves, red pepper and fennel might seem like a lot but the complexities of each spice together make for a wonderful flavour combination added to so many dishes, including the humble winter carrot.

Earthy and dense, these bright reminders of a summer past wait anxiously in the root cellar to come alive again. Flavour packed and vitamin rich carrots along with the zip of curry does us a great justice to blasting the February blahs.

My father in law is a master at soup and a farmer’s market frequenter. With a constant variety of seasonal vegetables, he has shown me tons about eating locally. This is an adaptation of the soup I’d recently devoured at his home.

Heat the oil in a large stock pot.
Sauté the onion and garlic over medium-high heat until soft, taking care not to scorch the garlic.
Roughly chop the celery stalks into thirds and add to the onions along with the grated carrots.
Pour over the water, bring to boil.
Add the curry powder, ground fennel, chilies, salt and pepper.
Simmer for approximately 20 minutes.
Purée using a immersion or traditional blender, in batches until smooth.
Stir in the lemon juice and readjust salt and pepper, if necessary.
Top with chopped cilantro. (If you like it.)